skip to main | skip to sidebar

For the past few years I've been hitting DragonCon, a hard-to-describe con that is broken up into about 20 tracks that allow anyone who isn't boring to find stuff that fascinates them. The writer's track is full of panels that include writers, editors and agents. Some of the writers are pretty well known, others are low-level novelists who are still pretty interesting to hear from. I got to see Mercedes Lackey and other assorted writers who were fascinating to hear from and to grab little bits of advice from. Adding to the fun of DragonCon is that a large percentage of people dress up in costumes of every possible description from Spock to dinosaurs. 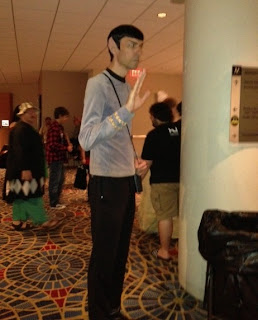 The Problem
Of course there was a problem. It's me. Usually when I go out of town, I worry about getting sick. Something about leaving town always makes me sick with sinus infections, colds and other assorted crap, but that wasn't even on the radar this year. I was just hoping that I'd be able to walk and stand well enough to get through the con. Waiting in line, walking from panel to panel and just standing around looking at costumes seemed like insurmountable obstacles after spending months unable to walk and then more than a month in physical therapy.
I told my physical therapist that I'd need to walk around for several hours a day, stand in line and make a long trek down an uneven street just to get my con badge and OH MY GOD I WILL HAVE TO WALK ALL DAY AND MY MUSCLES DON'T EVEN WORK!!1!!!1!! He thought it would be difficult, but he started me on various machines and recommended walking down the street every day to try to get used to it. I trained daily for more than a month and even went to the mall to ride the escalators to get ready for the multiple escalators at the con. The escalators are always crammed with people and if you can't jump off in time, OMG, the carnage!
So, I get there, trying not to limp and walking like a cartoon character, and was all set to take my walk down an uneven street in a crowd and then stand in line on an ankle that was still slightly broken. I told a friend that I had been training for this for a while and that I was confident that I could make it. She looked at me like, well, like I'd just said I'd been training for a month to walk down the street. The line was more than an hour, but all of that training helped me to do it. And all the vodka. 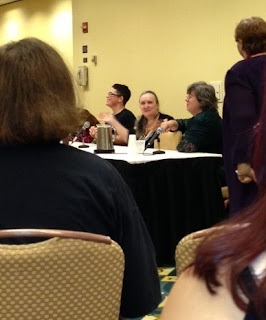 Mercedes Lackey Gives Me the Eye
Two Days
Once that obstacle was over, I had a lot of confidence that I could get through the con, listen to the writers I wanted to learn from and not look like too much of a freak doing so. I lurched around the con dressed like Edina Monsoon and saw amazing writers, a startlingly realistic Spock, two inexplicably naked women dressed in body paint, about 45 Khaleesis, some Tenenbaums(!), more superheroes than I ever care to see again, one of the Ghostbusters and a guy dressed like Sharknado. 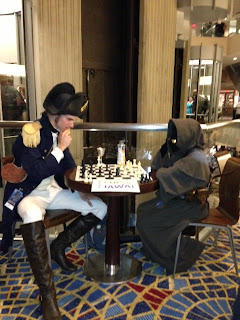 I met Julian Sands and impulsively said, "I liked you! Like, a lot!" to the seventh Doctor as he rolled past me on a Hoveround. 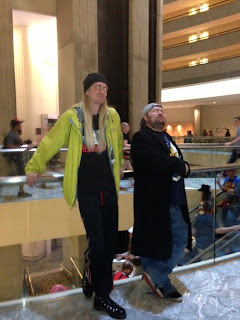 Then I got sick.
I got two and a half good days in before I was hit by bronchitis and had to severely medicate myself in order to function. Then I got to hear "Why do you look sad?" every four minutes because apparently I looked as spacey as I felt. If you've ever had to suffer through bronchitis while being woken up all night by drunken roommates who thought they were whispering as they philosophized about life and then get told about all the fun you're missing downstairs, and who hasn't, you might understand why I was ready to leave when the day came. Usually I hate to leave and get back into the normal world where absolutely everyone is wearing clothes and no one is dressed up as anything, but this year I was pretty fine with it.

Ok, so perusing the job listings this morning, looking for boring projects that I could use to expand my client base, I found a small listing for an online publishing company looking for short vampire stories. Scary stories, it asked for- no romance or sparkling. Kick ass, said I. I think I will comply.

Aside from my obvious poetry skills, I like putting together short stories that would have a hard time finding a market. But as soon as I read the description of what they wanted, a vague outline of an idea began to form. In three hours, I had written the complete story and edited it, and I was ready to submit.

It's then I saw that the deadline was yesterday. I submitted it anyway with a plea for deadline leniency. Will they even read it? You have to wait six weeks before you can even ask them about it, and no simultaneous submissions are allowed. In six weeks, I'm relatively sure that I will have forgotten all about it, and I can't submit it anywhere else right now if I want to keep them as a potential market. They may just delete it outright because it's past the deadline. I may never know. Good times, writers. Good times.

The Sleeper Must Awaken

So, I broke my ankle. I have no excuse for doing so. No one was negligent. No one left junk lying around for me to trip over. There wasn't even an incline to make walking difficult. I was walking along a gravel road staring at some bees and I fell over sideways. I literally just fell over like a dumbass.

It's been seven weeks now, and I just now feel like I'm waking up from it all. I wasn't able to walk at all until a few days ago, and even now my walking is pretty limited. I was high on pain pills for a few days after it happened. Ok, it was a few weeks. It was painful enough that I wasn't able to function well without them, but then you get the dizziness and weirdness that comes with them.

Writing has mostly been perfunctory SEO mill junk up until last week when I finally started to feel like myself again. There have been several times when I felt like I was asleep for long periods of time. Every time I've given birth it's been about two months until I felt like I was fully awake again. When I almost died from a staph infection two years ago, it was about the same amount of time. Writing during those asleep times is always in the back of my mind, but meaningful words are hard to get out.

Luckily, I've been doing content writing for so long that I have been able to do product descriptions and SEO stuff through mills pretty much the whole time, so we won't starve. People dump on the mills all the time, but I for one am glad they're always there. Sometimes, writing has to just be about money and making words appear in exchange for it. 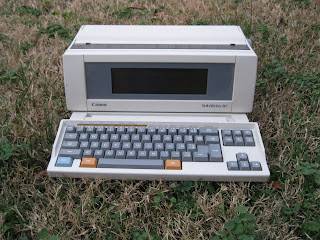 I struggled at the beginning of this year to come up with resolutions that would be useful instead of damaging and reasonable instead of completely insane. I started looking over the past few years and trying to think about what would really be helpful. And in that looking, I discovered that every year seemed to have a distinct theme.

Some years were all about work. Expanding my writing business was really all that I cared about for the most part. Some years I struggled to find a balance between paying writing work and fun writing work. Some years I struggled with confidence. I stumbled a bit under the weight of everything I was doing. This year is about me getting my power back. Starting a couple of months ago, I really started to see how much power a handful of people had over me. I started seeing that to get my power back, I would really, really have to fight. I'd have to step outside my comfort zone and teach others how to treat me. I firmly believe that we train everyone around us how to treat us, and sometimes that training goes woefully wrong. Not having your own power can shake your writing confidence and give you less force to thrust at the page. It was simply time to get it back. 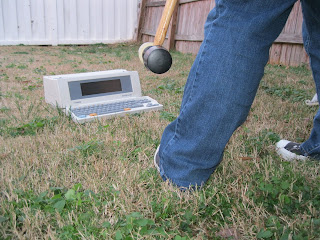 And so I took a stand. I stopped going to BS events that I didn't want to attend, and I stopped making excuses. "I don't want to go. That sounds stupid," is an acceptable way to turn down an invitation to something that shouldn't exist. And if there's something that you hate, that represents oppression and upset and everything unpleasant to you, giving it to the thrift store isn't enough. You should really just take a rubber mallet to it and smash the living hell out of it. 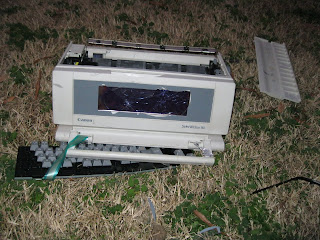 My only resolutions this year are to trust my own judgement and to finish the novel I've been working on for the past year. Those two things are really enough. I may query magazines, I may finish a couple of short stories and I may decide to start smoking cigars, but whatever I do this year will be on my terms.

L. Shepherd
I'm a freelance copywriter, Web writer and PR writer who writes for a number of websites as well as for private clients and a few small businesses.